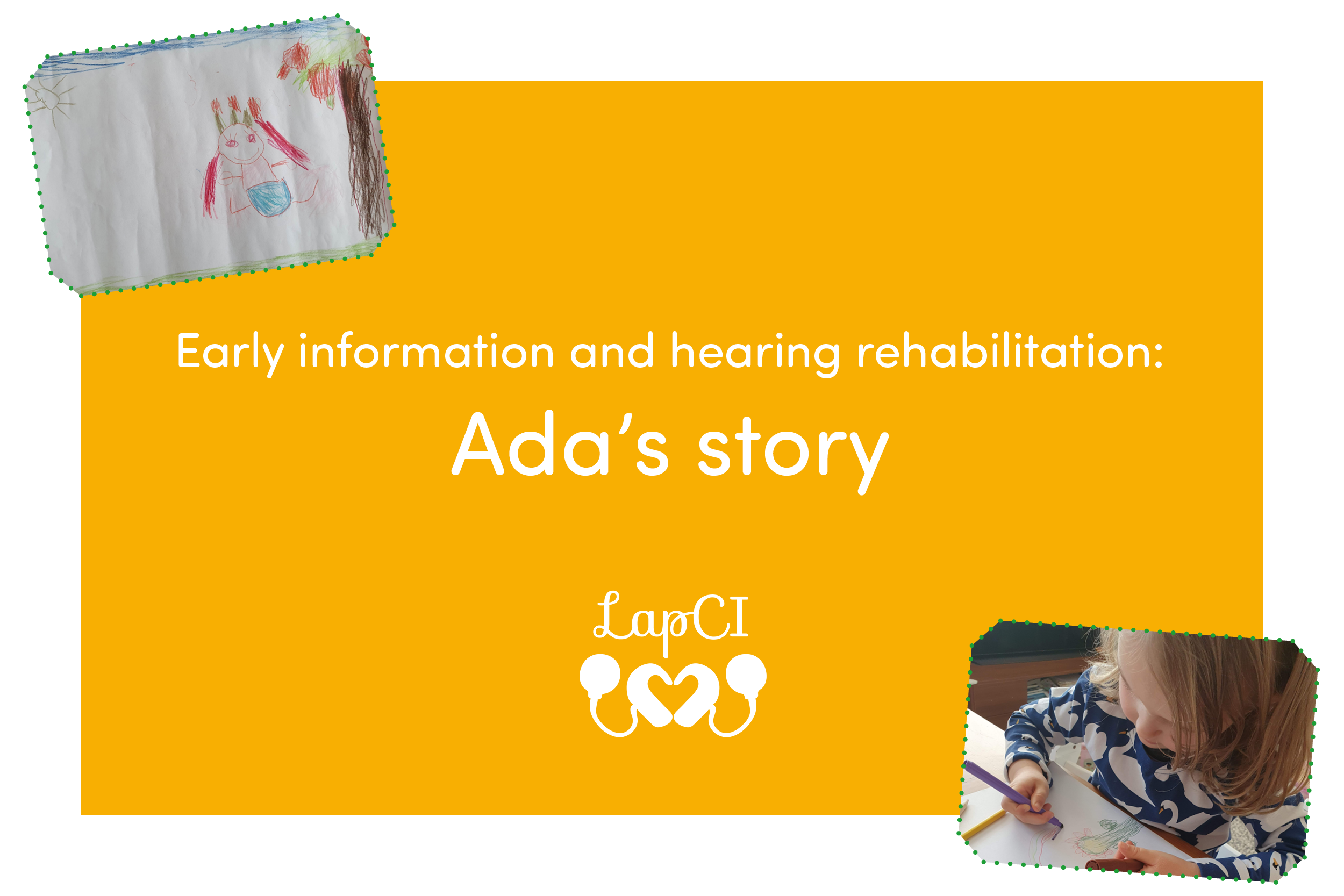 A couple of months ago we conducted a survey among parents of children with hearing loss, in which we asked them about their experiences of the early information they received at the hospital (after their child was diagnosed with hearing loss). We also asked the survey participants whether they would be interested in sharing their stories here on our blog. First one to share snippets from their journey is Piret, who tells her and her daughter Ada’s story. Piret’s text can also be read in Finnish through this link.

Where our story begins

Our (bumpy) journey on the hearing path started when our precious first-born daughter Ada was born just over 4 years ago. We are a multicultural family of four: in addition to Ada, we have another lovely daughter Elsie (1y 8m). I am Estonian and speak Estonian to the girls, my husband is Finnish and speaks Finnish to them. We also have English as our secret parent language (not for long though).

Being first time parents, our baby bubble was big and perfect. We did not really let ourselves become worried when Ada’s hearing test failed at the hospital after the birth, because it could have just been amniotic fluid in her ears, as they said. Ada also fooled us pretty well; she was a very observant baby and wanted to turn towards “the sound”.

Our first steps on the hearing path

When Ada was about two months old, we had our first visit to Lasten Kuulokeskus in Helsinki. I remember it being a beautiful spring morning, and in my head I was thinking that it would probably take like an hour and then we’d go back home and everything would be fine with our little princess. It turned out to be a visit that felt like an eternity, as it was difficult to make her fall back asleep so that they could take all the tests. After several long hours all the tests were done, but the doctor’s words were like a bolt out of the blue. My brain totally shut down on me – I could not understand a word she was saying in Finnish to me. I had to ask her to speak in English, but even then her words didn’t really make sense to me. My tears were just running, and millions of questions arose within me: why, how come she cannot hear, you must be wrong, why us, why our baby, what did I do wrong? So, the perfect beautiful baby bubble shattered into millions of tiny pieces… at least for a while.

Looking back on the first appointment, it felt the most stressful one. I didn’t really have time to come to terms with the new situation and I was still processing it all, but I already needed to decide on “big” things like the colour of the hearing aids. All I wanted to do was to hold my precious princess tightly and protect her from all the bad things. The first visits to Kuulokeskus were the most difficult ones in general – both emotionally and physically. At first there was definitely a huge amount of information, maybe even a bit too much. Too many new terms in a language I was still not proficient in, too big a change, too many new faces. The staff were very friendly and helpful, but they were just staff: they could not always sit down with us and listen to us for long. Another “annoying” thing about the appointments was that there was a new doctor every single time – which meant that we had to repeat our story all over again, answering the same questions etc.

Getting used to the new normal

What saddened me the most at first was that Ada had not heard my voice when I had been talking and singing to her since her birth. Still, I kept singing and talking to her even before she received her first hearing aids, and I think it paid off at later stages of Ada’s speech development. Even though my brain tried to tell me otherwise at times (“why do you speak or sing to her, she cannot hear you?”), my heart knew what was best. I was holding her while singing and talking to her, so she could sense my voice vibrations and see my face and lips.

Ada has always been a perfect daughter to us, no question in that. But it did take me a bit of time to get used to the “new reality” and get adjusted to the new situation. My husband had to remind me that all Ada needs is to be loved, held and cared for, and that there is nothing that hinders her to lead a perfectly beautiful life. Ada was very brave and great in every way during the journey. I felt so relieved when she got the hearing aids at 5 months old – now I could comfort her more easily with my voice as well. It took a while to get used to how to put the hearing aids in, but we managed well. She adapted easily to her new “little helpers” and was curious to explore the world of sounds. We took tiny steps into the hearing world with her – at first keeping the aids in for only an hour, then after a few days prolonged the time. It was great to see her reaction to the new world of voices and sounds.

At times it felt that there was no time to really enjoy the baby bubble and just be with her. There were appointments just one after another and some felt a bit meaningless and a waste of time. We met with all the specialists, but there was no real support for the parents. It was always about our baby having hearing loss: nobody seemed to really care how the parents were coping with it, whether they needed to talk to someone. During this time, I started thinking about what I did wrong during my pregnancy: I had all sorts of self-blaming thoughts. This continued until the gene test revealed that my husband and I were both carriers of the gene that prevents Ada’s inner ear hairs from moving.

Looking back, I think I would have appreciated meeting with a parent who had been in the same situation and could relate to us, listen to us and give us some emotional support in the midst of it all. Doctors are professionals and they do a great job, but they are not really able to understand what you as a parent go through after receiving the diagnosis and what raising a child with hearing loss is like in real life. One person who helped us a lot on our journey was our speech therapist, with whom we started meeting weekly when Ada was 10 months old. She answered our questions and issues regarding language development, was great at easing my worries and fears, and she patiently answered the millions of other questions I had. She had a really good connection with Ada already from our first meetings, and she smoothly led us into the hearing world.

The decision on whether Ada would get a CI in one ear or whether she should continue with hearing aids only was a huge one. It was the most difficult decision in our lives; however, we wanted Ada to hear our voices, her own voice, the birds singing, music and everything else. We were given enough information to make it clear that with hearing aids Ada would not be able to hear equally well and therefore the language development would be hindered. We had an appointment with the surgeon where he and another doctor explained more things and answered our questions. I think it was a very useful meeting, and I felt that the doctor and surgeon had time only for us and focused solely on our situation. In a way that meeting gave me a bit more peace of mind that we had made the correct decision for us and Ada. Of course I had thoughts of “what if…”, but at the end of the day Ada is our daughter and we are her parents, so it is only up to us to make such life-changing decisions.

Ada got her CI when she was a bit over 1 year old. After the CI was activated, Ada’s language development just shot into the sky like a rocket. She started saying proper words when she was only 1,5 years old and absorbed new words and expressions and repeated them so eagerly that it felt like a miracle. She was making 2–3-word sentences before she was even two years old. Reading books, listening to music, playing musical instruments and singing have been crucial in Ada’s language development, in my opinion. It has given her a huge amount of vocabulary and helped her remember the words more easily. Singing and dancing is part of our daily life these days, and she often composes her own songs. The moment she wakes, she starts talking and singing – we have a never-ending concert in the house. Ada has also mastered both Estonian and Finnish vocabulary and grammar excellently for her age, and the “little helpers” – hearing aids and CI – have truly helped a lot.

On starting kindergarten and how life looks like now

The start of the daycare went smoothly when Ada was about 2 years old. Before she started, we had a meeting with the teachers, where we told them what should be taken into account when talking to her, what she likes to do etc. We showed them how to change the batteries and how to put the devices into the ears if needed and they practised it too. We also got great help from the rehabilitation specialist from Kuulokeskus, who had an extra meeting with the teachers, explaining more in detail how the CI works, showing visuals and what should be taken into account when being around Ada. When Ada moved into the older kids’ group, we did the same steps again. In addition, the rehabilitation specialist suggested acoustic panels to be installed in the group areas, which not only Ada but also the other kids benefit from. Ada really likes the daycare and has made friends easily. She is a favoured playmate, and other kids have to “fight” over whose turn it is to play with her.

Even though the start of our journey was very emotional and bumpy at times, our little princess is perfect. Ada is a wonderful and stubborn 4-year-old equipped with an I-know-it-better attitude, who likes princesses, mermaids, wandering in the forest and looking for fairies and who loves being part of everything we do. She asks millions of questions about life around her and is at times so observant that we are baffled. She is our little miss Sunshine – always smiling and letting her fantasy fly. She can and she is able to be and become anything or anyone she wants to be – there is no limit.

Read Ada’s story in Finnish by clicking on this link (opens in a new tab).